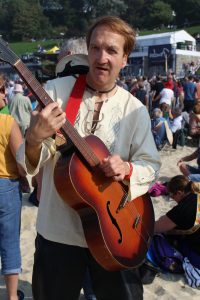 Hello everyone, it’s been a mighty long time since I last posted some news about myself. I will try and post more regularly but the posts will be a lot shorter than this one!

In July 2016, I decided to commemorate Yuri Gagarin’s visit to the UK in July1961. I played in two cities he visited: London and Manchester, 55 years to the day, and in honour of the great cosmonaut, at each gig, I performed my song “Yuri Gagarin”.

The first gig was at Belushi’s in Camden Town, London on 12th July. My own performance could have been better, but after me was an Italian guy who danced his heart out to his pre-recorded music. He gave it his all and I was sweating just watching him – fabulous! That’s exactly what I like about Open Mic events – you have to expect the unexpected. The day after my performance, I bumped into an American musician who was in London on a visit. We had a chat and he gave me his CD. You can check out his song “Karate” on my YouTube channel; I love this song, it’s really cool, 60s garage rock.

The following day, on 13th July, I travelled up to Manchester to play at the Thirsty Scholar, a weekly Open Mic event run by Tuesday Tony. The evening was packed with good/fun performers, among them a guy called Krazy Horse who is in his 70s and still performing. In over five decades he’s worked with well known US and UK artists as diverse as Karl Denver, Lonnie Donegan, Bert Weedon and Tommy Cooper. I filmed him, you can watch a clip of him on my YouTube channel. It just goes to show that (playing) music keeps you young!

On my way to the train station, (in the famous Manchester rain) I got talking to a Mark ‘Bez’ Berry (Happy Mondays) lookalike (or was it the man himself?) and he told me stories from the Hacienda days in Manchester in the late 80s and early 90s. I loved Manchester and hope to be back soon.

End of July, I was off to play in Hungary in a village called Tordas.

It is full of artists, sculptors, painters, craftsmen/women, musicians etc. and has its own radio station. I was invited to play at a birthday party for two of my friends and was very pleased that Éri Péter of www.muzsikas.hu sat in to play slide guitar and mandolin on several songs. There’s no video of the performance just photos, but next time I play with Péter, I will make sure that there is one.

In September, friends of Andy ’Thunderclap’ Newman, who passed away in March 2016, organised a memorial event which was very well attended, with performers, speakers and slide shows. I posted a short video of the event on my channel in the Thunderclap Newman Band section.

I started 2017 with a performance in January at The Chambers which is a stylish Art Nouveau café in Folkestone run by fun guy Tony King .

I love playing at this venue , as you meet a complete cross-section of musicians, old and young alike and, as an exception to the rule at Open Mic events , often more female than male performers – bring it on sisters!

The gig after that was in Canterbury at the Black Griffin, a superb British pub, where my slide guitar songs went down really well, as did the local brew I tasted. 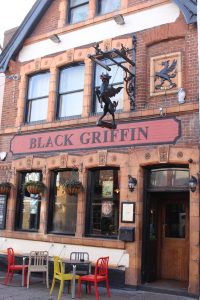 In February, I played at Mr Wolf’s in Bristol. I have been to Bristol many times but have never actually performed there, so that was a first for me. The venue has a very hip vibe, great stage and the sound was pretty good too.

It was at Mr Wolf’s that I first heard someone perform/sing, at an Open Mic event, in a language other than English. The singer was Nina and she was Polish. 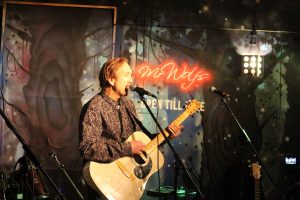 WolfSlide at Mr Wolf’s in Bristol

March saw me perform in Islington,London again, at the Steam Passage Tavern where some of my fans showed up to cheer me on. Of the performers, I liked a guy called Wolf In A Bear Suit best, who played his song ”I Feel So Milton Keynes” – 21st century punk, I would call it. I have some video footage of this song and if the sound quality is half decent, I’ll post it.

In April I attended a 1 day workshop in London called

Introduction To Songwriting, organised by The Songwriting Academy https://thesongwritingacademy.co.uk/ (copy this into your browser; I couldn’t get the link to work). Look up their website, all you budding and flowering songwriters!

Although I have been writing songs for a long time, it is true to say that, like in most fields of life, one never stops learning. The workshop was very informative and fun, due to presenter Martin Sutton. Martin is a seasoned and very successful songwriter who has written songs for Celine Dion, Lulu, Mike & the Mechanics and Backstreet Boys to name a few.

Towards the end of the day, we were split into groups of ten and had to compose a song in 10 minutes to a backing track of bass and drums – yo sister/brother!

My YouTube channel is up and running now, if the link below doesn’t work, go to YouTube and search for István Etiam. Go to Playlists, to see all the sections.

Have a listen to my songs, plus all the other featured artists on my playlist – and don’t forget to Subscribe to my channel.

I have started recording my second four track EP / CD ”Hope” and will endevour to keep you updated about its progress. Drop me a line, I’d love to hear from you, wherever you may be!

Finally, I would like to wish you all a Happy Christmas and the very best for 2018.