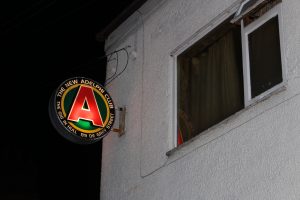 On Monday, 11 December 2017, I arrived at Hull railway station to play at the Musicians’ Night (Open Mic) at the New Adelphi Club. I had hardly stepped in the cab with my guitar, when the cabbie aka ‘Songmeister’ launched into a joyful little ditty – what a welcome!

The Adelphi is one of the UK’s most celebrated Underground venues.

I wanted to play there because of the amazing history of the place. The venue was originally a three bedroom terraced house with a garden, built in a residential area. Paul Jackson, the current owner, bought the house in 1984 and established the music venue, which is still going today. It would take too long to list all the acts and bands who played there when they were hardly known outside their local patch and then became famous, but here are a few who performed there, mainly between 1984-1999: The Housemartins, Pulp, Shamen, Fatboy Slim, Happy Mondays, The La’s/Cast, Stone Roses, Beautiful South, Radiohead, Oasis, Pavement and the list goes on. Suffice to say I had a great time, played my songs and listened to some great acts.

One of my fans from Up North! 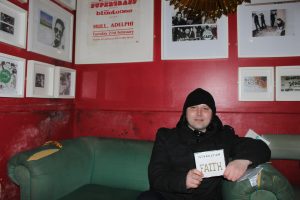 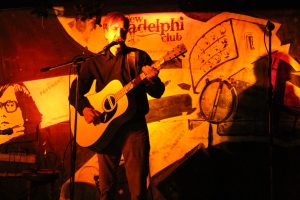 Below is a photo of me with Paul Jackson, a true gentleman and a scholar and my thanks go out to him and the soundman Matthew (I think) – merci! I really enjoyed my time at the Adelphi. 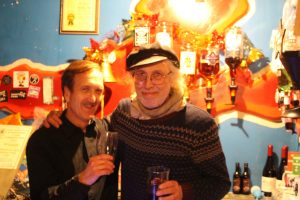 As I left the venue, I played a happy/sad tune on my harmonica while the snow was gently falling on my weary eyes.