For days, I could not comprehend it, for he was such a fixture in my life. He has left a gaping hole not just in my life but also in the lives of his many friends and relatives.

I have known Andy for over 30 years and he truly was “a gentleman and a scholar”.

He was gentleman, because he behaved like one, he was always measured and polite. In all the years that I have known him and worked with him, I have never once seen him angry, never heard him shout. He was also a most generous person who would give up his time to help someone in need, something I have witnessed on many occasions. He certainly helped me out and gave me support when I needed it.

He was a scholar because I have never met anyone with such a wide general knowledge. Long before the arrival of the Internet/www, I could ask him about any given topic and he’d be telling me about it at great length. He was a born storyteller, a raconteur, and every time I met him, he had an anecdote up his sleeve, some hilarious, others interesting. How I first met Andy is an anecdote in itself, which I will recount later.

Having met him and realised that he was the keyboard player in Thunderclap Newman, I always hoped that I could work with him one day.

It took many years of persuading and a lot of Hungarian goulash at my place – for Andy appreciated good food – before he finally relented and agreed to give the Thunderclap Newman Band a try. He was wary and cautious of the music business but once he realised that the musicians around him were genuine, he was completely behind the project. Andy had a lovely, soothing speaking voice and, in my opinion, he also had a great singing voice but my impression was that he didn’t like to sing in public, which was a shame.

Unfortunately, the Thunderclap Newman Band project didn’t work out but each of the band members, of that I am sure, know how lucky they were to have been given the chance to work with such a consummate musician. We all learnt a great deal from him. He never lectured us, he merely pointed out how a certain passage should be played, a certain phrase ought to be sung and all the while he was patient with us.

I am sad that things didn’t work out with the band that he joined after he left the Thunderclap Newman Band. Only one member of our band at that time was a pro musician and Andy hoped that the new band consisting of professionals would bring him well-deserved success but it was not to be.

Just before he passed away, Andy and I were working on one of my songs with the aim to record it in the studio in a couple of months.

P.S. If you have any stories or anecdotes regarding Andy which you would be happy to share, please send them to me and I can post them on my blog. 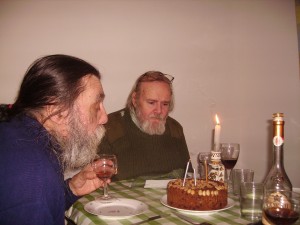 Celebrating Andy ‘Thunderclap’ Newman’s 67th birthday with friend Ted (on the left) at my house. I made Andy a cake and we had some Tokaj wine.