Below, some photographs I took at the unveiling of the Gagarin statue in London in April 2011. The statue remained in front of the British Council headquarters for a year and was then transferred to Greenwich. Helen Sharman became the first British astronaut and the first woman to visit the Mir space station in 1991. 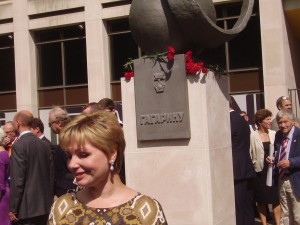 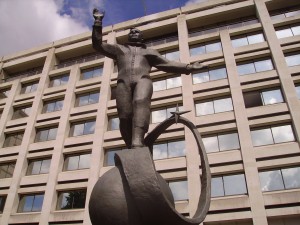 Gagarin Statue in front of the British Council building in London, April 2011

Yuri Gagarin, the first man in space, is commemorated by singer/songwriter István Etiam who performs his award-winning song Yuri Gagarin – a track from his recently released album Faith – in London and Manchester on 11 and 12 July.

His live performance marks the 55th anniversary of Gagarin’s visit to the UK in July 1961, only 3 months after his momentous feat.

Gagarin’s achievement made a lasting impression on the young István, then living in Hungary. In 2001, as part of the 40th anniversary celebrations, a Russian radio station ran a world-wide competition inviting people to send in paintings, films, poetry and songs, honouring Gagarin’s memory. István submitted his song and was awarded a special prize. It is István’s ambition to perform his song in the Russian town where Gagarin was born and in Star City where his journey into the unknown began in April 1961.

Gagarin’s visit to the UK took place at the height of the Cold War, but for a short time he was able to unite the world in joy and celebration. It just goes to show that great achievements have universal appeal; crossing political and ideological boundaries.