Eurovision 2021 has been and gone but here’s a little story regarding Eurovision 1998 which was held in Birmingham, UK. I was then still working for the BBC and I applied to be the guide to the Hungarian delegation.  I had to apply internally for the job and I didn’t think I’d get it, thinking someone from the Hungarian section from the BBC World Service would be selected. I I put in my application anyway and was rewarded with one of the most bizarre interviews I’ve had – and I’ve had a few of them. I was working at the Film &Videotape Library and before the interview I borrowed many tapes and watched every contest from 1960 onward, I made extensive notes and by the end I really knew my stuff and could name the winner and “Nul Points’ contestant of every year. I arrived at the interview and was led into a room where a lady and guy where sitting a long distance away from me. They turned out to be the Executive Producers of Eurovision 1998. I sat down and waited for the interview to begin….and waited ….and waited…and waited. The two were talking to each other, I was just some object in the corner. I didn’t say anything of course and suddenly (yes, suddenly) after 15 minutes they announced that I can leave and they would let me know. They didn’t ask me one question, not a word, not a syllable. I left and a week later came a letter saying that I had got the job! Here’ a photo of some Eurovision bling that I got as a present. It was an amazing week that I will never forget; I could write reams and reams about it, let’s just say that Hungary came third from the bottom. Charlie was the artist and he was a good singer with a good song. Trouble was, it was the wrong song for Eurovision. Even then, it was not a good idea to enter a blues tinged song with blues harp. Long Live Eurovision! 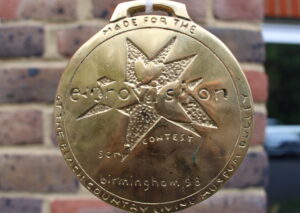 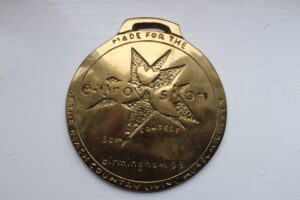